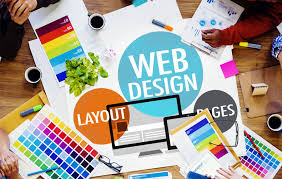 The phrase ‘going flat’ is always taken in a negative connotation, but not with the latest fad in website designing, where the designs are literally going flat.

Looks like flat website design is well settled and is here to stay, at least till the near future it seems. The debate is, whether flat design is just a passing fad or is it the web’s permanent new look, and that remains to be seen, but so far the web has gone flat for sure.

Like the hottest fashion fads, website design trends come and go. The days when carousel sliders and sidebars ruled the Web are long gone. In the last few years, flat websites have taken over. So why exactly the web designers are going flat these days? It’s pretty simple. The web user these days is way savvier, say, more than what their parents are used to back in the days during the 90’s and 00’s.

90’s and 00’s saw the rise of shades and textures to bring users’ eyes to particular point. However, these days the users are well versed in navigating their way through a website a lot easier. Hence, no need of fancy work really.

One more reason why flat design is rising is because of its lighter nature, it takes less time to load for flat design websites. They look more clean and professional. According to Bluehost, these sites offer perfect scalability for mobile devices. These attributes not only enhance UX but also improve a site’s PageRank.

It’s not necessary that you jump the bandwagon simply because every other business is doing so. You need to look at it and study carefully whether you need a transition to a flat design and whether it strikes a chord with your digital strategy. Only after you’ve weighed in the pros and cons you should go for a flat design.

A flat user interface is more efficient and predictable – at least for experienced Web users. Instead of scrolling through various menus, flat websites lay icons and buttons side by side in a predictable fashion. Further, when it comes to mobile web, no website will be successful without a mobile-friendly interface. More than 50 percent of Internet activity in the United States takes place on mobile devices. Flat websites are perfect for mobile devices due to their fast load times and attractive scalability.

Businesses are attracted to more than the aesthetics of flat web design. The fast load times, mobile-responsive interface and predictable layout improves UX, which influences both PageRank and conversion rates. Also, flat websites tend to cost less because they do not require as much custom coding.

It remains to be seen whether the flat design will survive the onslaught of contemporary trends and fads in website deigning or will it be a bottle-rocket fad that will burn out as fast as it took off. Let’s see if it is the new way forward for the web that remains popular for decades to come and whether it will inspire an entire new generation of designers and developers or will they shy away from it in the future.

This Week in the Marketing World

GDPR: Why It's Important and How to Keep Your Website Compliant

Get Synced With The Digital World - Effortlessly!